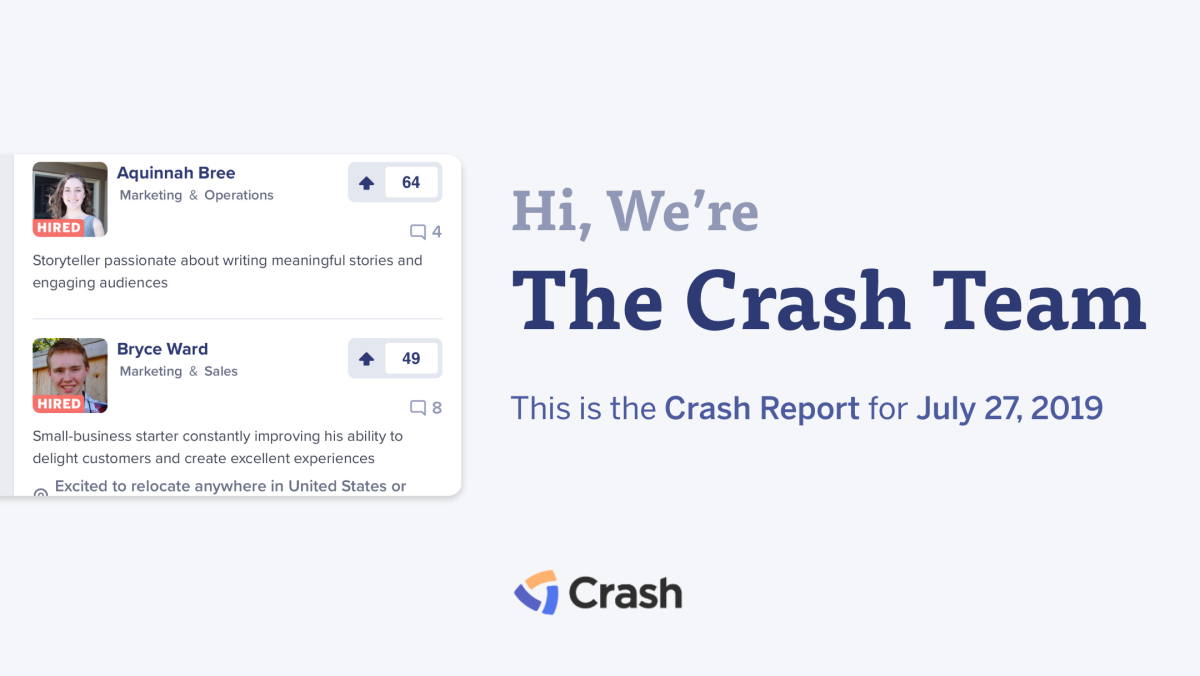 This week, we focused hard on reaching out to job-seekers about launching on Crash and helping connect Crashers with awesome opportunities.

Oh, and Stirling and Bryce, two of our Crashers, got hired this week!

Bryce got hired in eighteen days. Stirling, in twelve. (That’s less than 20% the time it takes for the average job seeker to get an offer!)

This is why we do what we do.

If you’re on the job hunt, we’d love for you to join them. Reserve your spot to launch here.

Here’s what we worked on this week.

Isaac and Mitchell ran a workshop with Crashers on how to maximize their launch.

Mitchell recruited new Crashers and helped more job-seekers set launch dates. He workshopped with new and upcoming Crashers about their launch and job hunts, went to a career fair, and brainstormed with Chuck on user experience. He also wrote this week’s newsletter.

Morgan created shorter promo videos for Crashers–and they’re getting better responses. She promoted Crashers on social media and talked to job-seekers about how Crash works. She also put together a repository of Crasher success stories and the videos she’s been making for them.

Adding to the Platform

Chuck shipped the ability to see comment counts on the homepage. He also redesigned the onboarding process, made it so you can format the text in your bio, and worked on an upcoming Featured Crasher section on the homepage.

Dave shipped several significant performance improvements across the site. He fixed a high-impact bug around login and signup, and he also mocked-up and helped Ilya build out a new launch dashboard (and it’s just getting some final touches before going live!).

Ilya got 95% done with being able to ship comment replies and editing. He worked on the new dashboard and the Jarvis integration, worked on Jarvis’ fullscreen UI and the ability to load more Crashers on the homepage, and is fixing fastboot bugs with Dave.

Dave and Ilya also recorded epidosde six of the Crash Log! Listen to their podcast on building Crash right here.

We know some awesome job-seekers who would love your help in finding jobs. Head over to the homepage and upvote, share job recommedations in the comments, and post your favorite profile on your favorite social media. It’ll make them pretty happy.