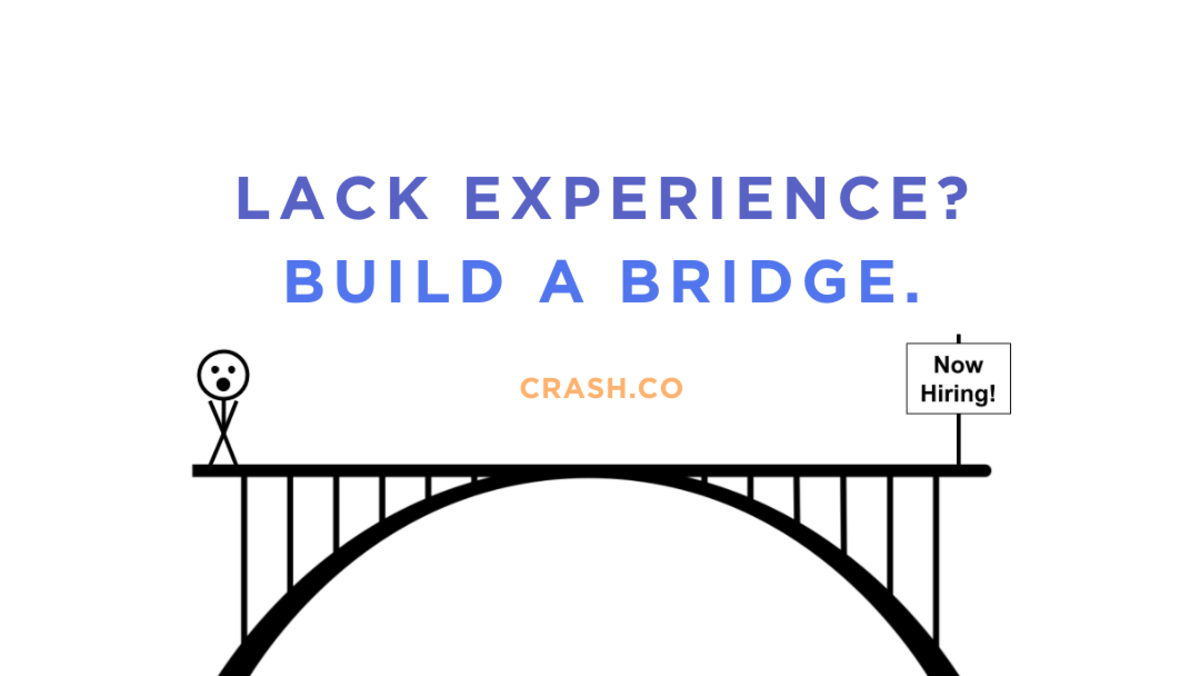 How To Win Your First Job Without Any Experience

People commonly agree you need opportunities before you can get experience. They say if you lack experience, you have fewer chances of launching the career you want.

No one starts with experience. No one.

You need a bridge.

But what good will a bridge do?

You may want to sit down for this.

Average Joe–AJ for short–wants a job. But AJ has no prior work history. He has a lack of experience. AJ needs money. AJ has bills to pay! And his mom wants him to move out of her basement.

AJ is like most people starting their careers. He believes he has to have a job to get a job. AJ also feels like a loser because no “cool jobs” will hire him. He believes this because years of schooling pounded this into his head.

But AJ is wrong.

AJ is not a loser. He just doesn’t know where to start.

AJ doesn’t know where to start because no one is hiring Medieval Literature Majors. He feels betrayed because his college advisor told him, “You’ll have hiring managers battering at the castle gates to hire you!” AJ believed her.

AJ thought he should start by going to college. He didn’t know there were other options.

So now AJ is back to square one. “How do I get a job? Everyone wants experience, but I lack it. No one cares about my degree!”

AJ is about to learn about bridges.

AJ needs a bridge–well, given his major, let’s say AJ needs a drawbridge.

He needs a drawbridge because there’s a big moat standing between him (job seeker) and his fair maiden in the castle (a job).

AJ needs something that allows him to cross over the threshold of experience–without actually having it yet.

He doesn’t need a physical bridge. He needs something to signal to the job-giver that he’s worth taking a chance on. AJ needs proof he can do the job or learn how to–fast.

So how would he do that? Where would he start?

AJ needs to prove he has skills–or the ability to learn skills quickly. Bow staff skills?

No. Swordsmanship doesn’t do you much good in a jousting contest. AJ needs skills fitted for the type of battle he’s going to fight.

How can he figure out what skills he needs?

Any job will do–for practice. But a job he actually wants is best. If AJ needs help to discover what kind of job he likes, he should read this, browse through our career guides, and take our Discover quiz.

Once AJ has picked a type of job, he should go make a list of companies and job postings hiring for that role.

Using the job descriptions, AJ can look at the kinds of things the job-havers would like to see from the job-wanters.

AJ should take special note of the kind of work the job-havers outline–and not focus so much on any requirements that make him feel excluded. AJ should also pay special attention to the activities and who the role works with:

Focus on the work involved in the role.

After AJ has made a list of the kinds of work, he’s ready to start creating a blueprint of his bridge and a materials list! And oh, what a magnificent bridge it will be!

Once AJ has made his blueprint and collected his building materials, he’s ready to start building.

With blueprint in hand, AJ can focus on creating a bridge between his current lack of experience and the role he’s applying for.

What AJ didn’t learn in college is that the job-givers actually just want someone who can perform the job–or someone who’s willing to storm the bastille if that’s what it takes.

For entry level roles, any skill AJ doesn’t have can be made up for by signaling a willingness to work hard, an ability to learn quickly, and a breadcrumb trail of consistent effort–things like blogging every day for a month, building projects, or offering to work for free for a couple weeks all help signal to the employer he’s a less-risky hire.

AJ studied literature, so he’s bound to be well-versed in storytelling. AJ should use this to his advantage in building his bridge–any way he can tell a story about the things he learned through his projects and how that can help the job-haver’s business is sure to add extra support.

Once the bridge is built, cross it!

So, how should he go about getting the job-haver’s attention? Not by applying like everyone else. AJ should try to figure out who does the hiring, the interviewing, or even someone who is currently in the role he’s seeking. AJ should offer to buy them coffee to learn more about the company and the role. He should also do some research beforehand and ask good questions about the company.

AJ should send a thank you note afterwards.

Then, AJ should carefully craft a message (informed by his findings) to the person who is hiring.

He should share what he likes about the company, how he heard of them, and why he’s interested in what the company is doing. He should tell the person the thought of participating in the vision of the company excites him immensely (unless that’s untrue)–and that he would like to meet to learn more about what it would take for the open roles. And, for good measure, he should include a link to the bridge he’s built.

At this point, AJ has done a lot of work.

He’s grown stronger from the burden of building a bridge.

So, will AJ get hired? Maybe. Maybe not.

But AJ is no longer some punk kid who needs money. AJ is now a bridge builder.

He’s got proof he’s willing to work hard and can commit to something. He’s reduced 99% of the risk of making a bad hiring decision because all he had to go on was his need for a job and a flimsy paper degree.

Even if AJ doesn’t get hired at that company, he’s got a list of other companies he made during the process he can go try the same approach with.

Regardless, AJ is now better equipped to teach himself how to bridge the gap between his lack of experience and the requirements for any job.

AJ is not a loser. AJ is like most people starting their careers.

But now he knows where to start.